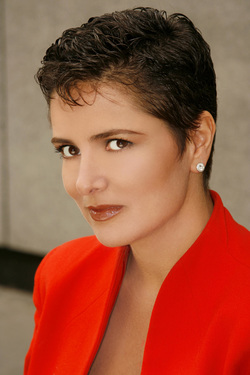 Josselyne began her career in 1986 as a producer for Zanders Animation Parlor, where she produced animated commercials and developed animated television programming and films.
She moved into the interactive Television world as Director of Production ACTV Interactive TV where she supervised the production of 150+ episodes of original programming. She has produced 300+ commercials most of which she was a creative force in them as well.
She wrote and produced award winning programming for A&E's Biography, and was instrumental in designing marketing/branding and ad campaigns for many of her clients.
Josselyne then pursued her lifelong "dream" of being a songwriter and pop singer. She and her group BOY KRAZY signed a record deal with Polygram Records and their hit song "That's What Love Can Do" soon replaced Whitney Houston's "I will Always Love you" as the #1 song in America. During her singing career she won the HINRG award for best vocal performance, the BMI award for most played song on the radio and joined the very exclusive club of artists whose first song went to #1 on the charts. (A club that includes Elvis and The Beatles).
Josselyne has spent the past 17 years as a personal manager for actors, writers, directors and recording artists. Her clients can be seen in Mysteries of Laura, Hostages, Blacklist, Birdman, Orange is the New Black, the Twilight Series, Us & Them, Blue Bloods, The Big C, Boardwalk Empire, Homeland, The Newsroom, Spiderman, The Following, The Americans, Brooklyn's Finest, Sex and The City, Precious, Ugly Betty, Mercy, Gossip Girl, Kings, Cashmere Mafia, Lipstick Jungle, Rescue Me, all the Law and Orders, All My Children, As The World Turns, Guiding Light, One Life To Live, in addition to hundreds of films, commercials and Broadway shows.
Josselyne produced the feature films ANNE B. REAL, starring Ernie Hudson and Carlos Leon, as well as TOLLBOOTH starring Tovah Feldshuh and Marla Sokoloff. Josselyne also served as Music Supervisor and Post Production Supervisor for ANNE B. REAL which was released on Universal Home Video having already won dozens of film festival awards and being nominated for an Independent Spirit Award for Best Feature under $500K. Anne B. Real was also nominated for the PRISM award honoring the Art Of Making A Difference and can be seen on Showtime, Starz and Cinemax. In 2004 she completed producing the film, CAGED, starring Chris Elliot and Carol Alt, it premiered on Showtime. Her film "The Making Of..." was completed in 2005. In addition Josselyne produced the features, THE PACK starring Lucy Arnaz, Angie Martinez, Molly Culver, Zach Galligan and Carlos Leon, as well as THEY'RE JUST MY FRIENDS, featuring Lord Jamar, Malik Yoba, Thom Christopher, Bruce Altman and Al Snow.
Following in her mother's footsteps (a veteran casting director in New York) Josselyne was also the casting director on her films ANNE B. REAL, CAGED, THEY'RE JUST MY FRIENDS, BEYOND CONTROL and THE PACK, in additional to casting the WARNER BROTHERS film TWIST THE CAP: A TALE OF REDEMPTION and QUEEN OF MEDIA: THE WENDY WILLIAMS STORY.
With Josselyne's experience as a marketing and branding expert, a producer on the production side of the entertainment business, and her personal achievements as a globally known artist, Josselyne is distinguished as one of the few professionals who have been successful on the business, production and talent sides of the entertainment industry.
Additionally, having participated in transformative education programs for over 37 years, Josselyne has led programs for Landmark Worldwide, an international training and development company, for the past twenty four years, programs designed to inspire effectiveness and creativity in others enabling them to make their own dreams come true as well as make the world a better place.
Josselyne has raised close to $20 million dollars for various non-profits and has been integral in raising over $100 million. In 2001, inspired by the fundraising efforts of her then 5 year old daughter Sophie, Josselyne produced the first annual live benefit gala for FAMILIES OF FREEDOM, a scholarship fund to benefit the children affected by 9/11. The show included Barry Manilow, Chevy Chase, Denis Leary, Gabriel Byrne, Joan Osborne, Hallie Eisenberg, and many others. After raising over $250,000.00 with the first event, she was instrumental in creating a second fund called Families of Freedom 2 which focuses on scholarships for businesses below Houston Street and their families. Over 2,400 children have been assisted through college with these funds so far, with enough remaining to cover over 4,000 students total.
The second annual event which she also produced, raised over 6 million dollars. Josselyne was subsequently honored as NY1's NEW YORKER OF THE WEEK for her fundraising efforts.
She is the founder of CO OP CARES NEW YORK an organization dedicated to making it easy for New Yorkers to make a difference in their communities.
Josselyne is also the founder of a non-profit organization called UNITED GLOBAL SHIFT that is committed to shifting what is possible for humanity by shifting from fear, survival and scarcity to possibility, partnership and peace. She leads programs around the world to cultivate and empower leadership and source sustainable results.
Author of PEACE PROMISES: 30 Days to a more peaceful life, THE PROMISE EFFECT: How to create a life that wasn't going to happen anyway with Susan Woldman Elfer, and SO YOU WANNA BE A NEW YORK ACTOR co-authored with her client, Guy Olivieri.
Josselyne lives in Manhattan with her husband, three children, and cat. She serves as the President of the Board of Directors for her Manhattan co-op, and as the President Emeritus of SAC (The Sutton Area Community). She co-founded the annual Taste of Sutton event.