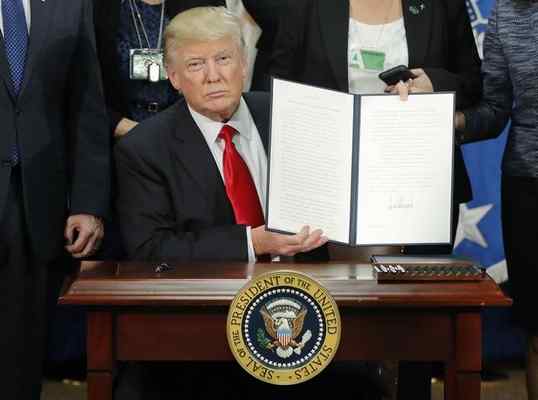 President Trump's first week in office has been marked by  controversy (over things like his inaugural crowd size and voter fraud accusations), and executive orders

I can't believe what I am seeing all these executive orders , President Trump surely can't just away with  signing all these without someone checking the legality.

What is an executive order?

Basically, an executive order is an official statement from the president about how the federal agencies he oversees are to use their resources.

It falls under the broader umbrella of “executive actions,” which derive their power from Article II of the Constitution, and it is the most formal executive action. Executive actions also include presidential memorandums (which are a step below executive orders and basically outline the administration's position on a policy issue), proclamations and directives.

An executive order is not the president creating new law or appropriating new money from the U.S. Treasury — both things that are the domain of Congress; it is the president instructing the government how it is to work within the parameters that are already set by Congress and the Constitution.

I totally get he wants to put America first and that he has been elected into office , just like Brexit we have to respect the outcome.

I am concerned about the orders

President  Trump's order suspending immigration from seven Muslim-majority countries for 90 days has left many foreigners confused and in limbo .

Wanting to build a wall , we can't go around making stereotypes and branding all Mexicans as rapist , drug dealers etc .I would like to know where is the President  getting his facts from .

I totally get that he wants to make his mark and get on with the job .

I went onto BBC this week to talk about foreign aid , again I totally understand that all governments need to review funding expenditure. The USA can't be writing blanks checks etc , however it would of been better to work with governments and have a exist strategy, cutting of vital support for the most vulnerable isn't a step in the right direction.

President Trump is no longer  on a reality show he's holds the most powerful job in the world .

All regulations in process have been frozen until the President – or an agency after he took office – approve them.
Any regulation signed by former President Barack Obama – including those that deal with energy efficiency standards – are on hold until Trump’s administration has reviewed them.

3. No federal funding for abortion services.

4. No TPP
The United States has been withdrawn from all Trans-Pacific Partnership negotiations in this memorandum. This includes signing the trade deal.

5. No more federal hiring
Agencies have been told by the President that they can’t fill any vacant positions or open new ones.
There are two exceptions: military personnel and vital public safety positions.

7. Dakota Access Pipeline and Keystone Memorandum
Permits for the Dakota Access Pipeline have been ordered to be approved in an expedited fashion.
This will include ‘easements or rights-of-way to cross Federal areas’.
A Keystone memorandum involves Trump inviting TransCanada to resubmit its pipeline permit application, with the State Department ordered to issue a final decision on the application within 60 days.

12. The wall
Trump states it’s the policy of the United States to immediately construct a wall on the southern border.

Agencies are directed to begin planning the project, and source funding for it.
The order also directs agencies to either construct or contract out more detention facilities at or near the Mexican border
All agencies are required to identify any US aid funds that have gone to Mexico in the last five years.
13. Banning entry to US from seven countries
The President has banned citizens of Iraq, Syria, Iran, Libya, Somalia, Sudan and Yemen from entering America for at least the next 90 days.
This totals around 134 million people who now cannot enter the country and further countries could be added to the list.
The US refugee program has also been suspended with none being admitted for the next four months.

I think many people across the world are sitting and waiting , thinking what's next

lifeisbeautiful and 9 others upvoted this.