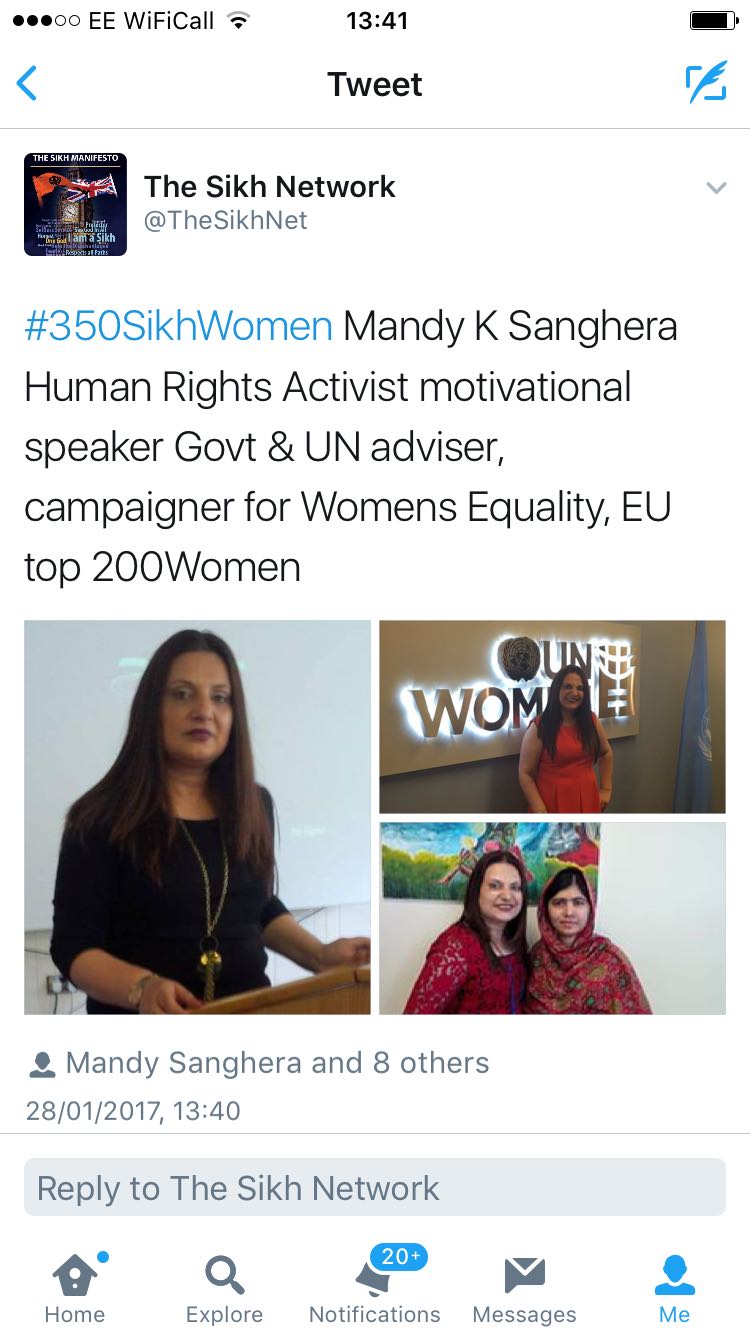 Today I was listed in a list celebrating #350SikhWomen

The word 'Sikh' translates as 'disciple', Sikhs are the disciples of the one God and who follow the writings and teachings of the Ten Sikh Gurus. The wisdom of these teachings in enshrined in scripture as the eternal guru, Sri Guru Granth Sahib ji. The message within is both practical and universal for all mankind to connect with the one god and fulfil our true purpose in this human life.

This has been a real history lesson for me , it has been wonderful to see so many women getting behind this campaign .

Sikhs across the globe last week celebrated the 350th Parkash Utsav of the Tenth Sikh Guru, Guru Gobind Singh Ji.
Guru Gobind Singh Ji’s greatest achievements. One of his key messages was one of equality, especially with regards to gender and appreciation of diversity.

This message is very important for me as I have spent the last 27 years tackling gender equality & challenge cultural ritual abusive practices .

The Sikh Network decided on the concept of celebrating Guru Gobind Singh Ji’s message on gender equality and diversity by collating and publishing details of 350 Sikh women in the month of January. The first five days were dedicated to Sikh women in history that set the tone for the #350sikhwomen social media campaign.
Jas from Sikh Network team spearheading the campaign said :

“I have learnt so much from researching the contribution of Sikh women in history. From the fantastic feedback we have had on social media this has been a real eye opener for many Sikhs and non-Sikhs and both men and women across the globe.”

“There is a huge demand to learn more and we think this is the start of something special. The Sikh Network are developing plans to continue with the educational part of this campaign of perpetually celebrating the contribution of Sikh women and the message of our Gurus.”

I spoke to Rani Kaur who is spent years campaigning and raising awareness of MS , She said this means so much to me as I have never been recognised on such a list

I have read so many tweets where women are grateful
I have nominated nearly 50 women from all walks of life . It was important for me that I celebrate others

I was speaking at a event and someone said I didn't know that there was so many sikh women in politics .
This list will inspire the next generation , it will show them that they can also smash the glass ceiling

Another key message of Guru Gobind Singh Ji was one of being proud of ones Sikh identity and being prepared to stand out and stand up for those less fortunate and champion basic human rights and not be frightened of discrimination as the Gurus taught us to be different.

I actually sleep breath this motto

Jas Singh founder of the Sikh Network said:
“We are finding the campaign at the same time as the 350th Parkash Utsav of the Tenth Sikh Guru, Guru Gobind Singh Ji is making people reflect on what the Guru gave us and the sacrifices he and his family made for mankind.”

“The sacrifices made are intrinsically linked to the right to practice ones faith and the importance of the Sikh identity in terms of the names of ‘Kaur’ and ‘Singh’ given to us by Guru Gobind Singh Ji as well as the significance of the visible identity.”

“We want to use this opportunity for Sikhs and non-Sikhs to appreciate all Sikhs need to be ‘champions of human rights’ and value the visible Sikh identity so it is not seen as an obstacle, but something to be proud of in making progress to the highest levels in all fields.”


I think this list is sending out a positive message to the wider community , too often people are guilty of focusing on the negative aspects of immigration and multiculturalism in the UK but I believe this list shows the great success. And shows Sikh women fully integrating themselves into British society, and raising awareness of their extraordinary contributions to the UK

Sunny Angel and 6 others upvoted this.